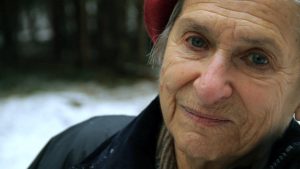 Dear Zane and all your company. Thank you for your present and such a substantive letter. I apologize for delaying the reply. Regarding your questions about my leaving the ghetto for partisans. As I told you before, a partisan organization was founded in Vilnius ghetto in January 1942, FPO, which in Yiddish means united partisans organization. I became a member of this organization. In September 1943 the situation in the ghetto worsened. Groups went away to partisans in the woods. The FPO leaders decided to send some girls to the woods to establish communication. In the morning of September 1943 6 pairs of girls were gathered in the library; we were instructed through which villages we should go, and we went home with the thought of leaving ghetto at night if possible. I lived just opposite the library, so I went straight home. My partner stayed in the library, as she didn’t have anywhere to go. Suddenly, she dropped in saying that I had to pack up quickly, as there was a chance to leave the ghetto. It appeared that one of the ghetto chiefs, Grisha Yashunsky (was responsible for culture) with his wife was going to ‘malina’ (den, a hiding place) into the city. A small back gate was to be opened for him.
I said good bye to my parents and sister, took a purse prepared beforehand and a handbag, a little peas which I cooked. We came up to the gate, took off our yellow stars and went out after the Yashunskys. They went to the left, we went to the right.
When we passed about 500 meters, suddenly a Lithuanian policemen ordered us to cross to the other side of the street. He of course, didn’t recognize us as Jews. We paid attention that from the distance we could see policemen standing every five meters in the place where the ghetto houses were. It looked very suspicious. So, instead of going away we made a big circle and came up to the ghetto gate on Rudnitskaya Street. At that very moment two trucks came up to the gate with soldiers in green uniforms. We understood that something was going to happen in the ghetto. We went away on our route, through the forest, avoiding villages. In the evening it began raining, we heard dogs barking, there was a village close by, but we didn’t want to go there at night. In the morning we dropped in at the most distant house, where the hostess told us the name of the village — Zverinas. We didn’t have it in our list, so we understood that we were lost. The hostess treated us with some milk and real bread which we hadn’t seen for years. We explained to her that we were going to dig potatoes and named the village. She told us how to get there. All day long, September 24th, we were walking in the woods and got to the village Zhagarino. It was the last one before the end of our trip. We came up into the village and suddenly saw two armed German soldeirs. What were we to do? Go back or after them? We decided on the second. Suddenly a young Polish guy came up to us and asked where we were going. We explained, next village Old Matzeli to our aunt to dig potatoes. He answered, ‘Don’t you see the Germans in front?’ ‘So what?’ – ‘A day before a girl was shot here, and the man who was with her managed to run away’. We asked him if we could stay over the night at his place, to which he replied, ‘It’s a village, if anybody sees you, they will bring Germans.’ He evidently understood who we were and where we were heading. He offered to take us to the forest and in the morning to show us the road. We agreed, as we didn’t have any other way out. So, we spent that night in a destroyed forest guard’s house. Sure, we didn’t sleep. We couldn’t forgive ourselves that we had left the ghetto and gave ourselves into the hands of a stranger. But he appeared to be a decent man. In the morning of September 25th he came and brought us some milk and bread, made us long sticks, because we had to go along a narrow wooden path, there was swamp around, if we made a step to any side, we could drown. As he explained to us, that path and other construction we saw later had been made for the German Minister of foreign affairs, Ribbentrop, who had come to hunt with the Polish Minister of Foreign Affairs Beck, approximately in 1938. We took off our shoes and went on clinging to the sticks. When we came up to a certain place, we had to go alone, as he couldn’t accompany us further. We said good bye to each other. After that we went as far as the French road (from 1812). Soon we heard, ‘Stop! Who is walking?’. We met a man with a gun. That appeared to be a remote point of the partisans’ watch, so called a ‘secret’ word. We explained to them who we were and where we were going. One of the two stayed with us, the other went to report his chiefs.
When we were staying there, suddenly our friend showed up, Khaya Shapiro, she was to leave the ghetto, too. She told us that Vilnius ghetto had been liquidated. By some miracle she had been able to escape from the column of people and, knowing the way, she came to the forest. We were sent to the Jewish partisans. When nowadays I pass the village Zhagarino, I always remember the guy who saved our lives. I never saw him after that and have not been able to thank him.
Thank you for everything. Yours, Fanya, friend and admirer.
Receipt for $400